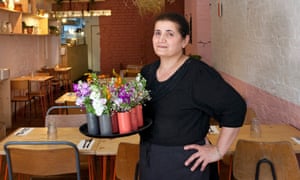 The best restaurants have a cracking narrative at their heart; a story that nourishes the soul as well as the belly. The narrative behind the newly opened Nandine in Camberwell, south London, is utterly compelling. It is what us old hacks call a good yarn. The headlines are strong enough: Nandine is a simple café, all plywood and painted brick walls, knocking out huge plates of big-flavoured Kurdish food at the sort of prices that restore your faith not just in eating out, but quite possibly in humanity in general. Every plate is a vivid rush of saturated tones, worthy of Technicolor in its pomp. Colours like that promise flavour; the promise is not broken.

Behind those headlines is an ancient story: of displacement by war, of immigration and the refreshing of memory and identity through cooking. It belongs to the Baban family, led by the matriarch, Pary. In 1989, then in her late teens, she was forced to leave her home in Qaladze, in what is today Iraqi Kurdistan, when it was attacked by Saddam Hussein’s forces. As she explained to Vice last year, Pary went in search of safety, travelling from village to village and picking up recipes as she went, noting the regional differences in a journal that she retains to this day.

Some villages flavoured their food with wild herbs yanked from the rough, stony ground. Others roasted large cuts of lamb. Kurdish food may feel familiar to those who think they know their Turkish or Middle Eastern dishes, but there can be ingredients like dill or celery that are unexpected. Rosewaters play their part. It’s all good.

Pary met her husband Pola while travelling across Kurdistan. In 1995 they settled in south London’s Elephant and Castle where, for many years, they ran a newsagent’s. Soon they had a kiosk, offering sandwiches, filled with the likes of stir-fried spiced spinach. The punters appreciated them. That led the family to take over their first space on Vestry Road in Camberwell, which was originally meant for sandwich prep but soon became a café. Pary’s baklava became a talking point. Soon they were invited to open a concession at the Peckham Levels food market.

And now they have this small restaurant seating just three dozen, called Nandine, which means kitchen in Kurdish. It is a family business. Pary’s boys Rang and Raman also work across the group. But there is the feeling of a broader familial enterprise; of a bunch of people determined to bring a more obscure strand of regional cooking to an eager, cosmopolitan south London crowd. We visit on a Sunday lunchtime, as brunch gives way to a few dishes off the main menu. It’s too early for booze for me, so they leave the gin out of a pomegranate and sumac G&T. It’s a sparkling candy pink colour and both sweet and sour, and just slightly salty in the right way.

We have a set of mezze dips: of hummus, made sprightly and bright by the addition of lime, then dressed with olive oil and sprinkled with white and black sesame seeds; of yogurt and tahini with the fresh crunch of diced cucumber, with a crown of salty capers and a purple dusting with the citrus burst of sumac; of sweet and smoky red pepper purée, the colour of rust, with shining beads of pomegranate. On the side are warm pieces of lightly oiled, spice-dusted and quilted flatbreads, with which to pull and dredge. It is an extremely diverting plateful for just £5.50.

From the brunch menu comes a shakshuka of long-cooked tomatoes, onions and spices, with baked eggs, their yolks still runny and, on the side, pieces of crisp-crusted, springy bread baked at their other site. The most expensive dish today, at a mighty £12, is the lula kebab, of boldly spiced minced lamb, but that money gets you a trayful. The two thick slabs of charred and seared minced meat are laid on more flatbread into which, generously, they leak their juices. To one side are pieces of grilled onion, tomato and green pepper.

There is a dish of a yogurt dip with, in the middle, some bright yellow pickled cauliflower, which is on more than friendly nodding terms with piccalilli. Up from that is another dish with, at one end, a robustly dressed onion and tomato salad, and, at the other, pickled red cabbage full of vigorous crunch and bite. There is a dusting of sumac and what I take to be za’atar as well as chopped green herbs. The same accessories turn up with pieces of “7 spice” chicken shish, rendered a bright shade of yellow by their marinade. If I was any cop as a journalist, I’d have asked for a list of all seven. Instead, I was too involved in eating it. Too often grilled pieces of breast like this are dry enough to lodge in your throat; this is tender and crisp. It is a better end for the chicken.

In the spirit of enquiry and, of course, pure greed, we have ordered too much. Our waiter tells us that in the evenings the best thing to do is come in a group of six and order the entire menu. “It will work out at about £12 to £14 a head,” he says. The point is that we do not have space to finish or even really begin the baharat fries. Instead we stare at what must be one of the prettiest bowls of chips in Britain, dusted with spice, then dressed with a little purple-tinged yogurt, pomegranate and sesame seeds, and more chopped herbs.

We do, however, have space for Pary’s famed baklava; for fragile crowns of crisp pastry, filled with crushed nuts and drenched in sugar syrup and made fragrant by the application of dried rose petals and attention to detail. Like everything here, first you look at it and sigh. Then you taste it, and sigh again. Another dessert of an unsweetened coconut milk cream has an odd, jelly-like texture, but makes sense once you get some of the spun sugar from the top, and the baklava from the bottom. And with the last scoop of the spoon, we are in love. Pary has made a long journey of so many kinds to get to this point. She has told us her story through the food on the plate. And we are all the richer for it.

Nandine does indeed mean Kitchen in Kurdish. It’s a blunt name for a restaurant but it works, both in Camberwell and Inverness. The Kitchen Restaurant, in a modernist town house overlooking the city’s river, is a buzzy bistro with cheery, encouraging food. Try the cod and smoked applewood cheese fishcakes, the seared chicken with haggis bon bons and make sure to ask whether the general manager has made one of her glorious cheesecakes for dessert (kitchenrestaurant.co.uk).

There’s failed restaurant hygiene inspections, and then there’s what happened to a Gloucestershire Pizza restaurant. During a November 2018 inspection a rat ran over the inspector’s foot. Recently they were fined nearly £2000 for offences under food safety legislation. Coincidentally, The Caterer magazine, which reported the story, has just relaunched its diary column. Its name: Kitchen Rat.

Wahaca, the Mexican restaurant chain, which faced a PR disaster recently when diners took to social media to berate the company for apparently making a waiter cover part of the bill of a table that had done a runner, has a new plan to tackle staffing issues. They’ve set up a confidential phone line so staff can leave anonymous messages for co-founder Mark Selby about company practises.

2019-08-11
Previous Post: How Living with HIV Changed After Learning He Was ‘Undetectable’
Next Post: 3 ways to increase your home loan eligibility