Tale of two schools: ‘We’re paying for a mother to bring her child to school out of PTA funds – and from my pocket’ 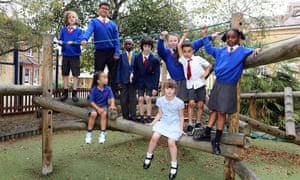 Headteacher Paul Stubbings knows that the pupils at his west London comprehensive school have the right to a free, fully funded state education. Yet he spends a quarter of his time asking their parents to give his school hundreds of thousands of pounds a year, meeting frequently with individual, potential donors.

He blames the government for putting him in this extraordinary supplicatory position: “I fully and freely acknowledge that what we are now doing [is] being driven to make up deficiencies in state funding. But children have a right to a top-quality state education. If the state isn’t willing to pay for that, I’ve got to do everything I can to secure it on their behalf.”

The huge sums of money some elite state schools receive annually from parents and other private donors is revealed today in an in-depth investigation by the Observer, which shows how very differently state schools across the country are funded – and the inequalities this can create. The investigation found that schools with a high proportion of pupils from low-income families – schools where two in three students, on average, are eligible for free school meals – barely seek to raise money from parents at all.

Stubbings is headteacher at the Cardinal Vaughan Memorial school, a Catholic boys’ school in Holland Park, where about 10% of pupils qualify for free school meals. He says the money raised is now so essential to the school that he has hired a development manager to help him increase donations and oversee the school’s private fundraising campaign. In its last financial year the school raised £631,770 in unrestricted donations from alumni, benefactors and parents, 60% of whom have pledged voluntarily to donate regularly to the school over a five-year period. This commitment enables Stubbings to factor the donations into his annual budget: “In order to keep the place afloat – operationally ticking over – we need the extra funds.”

New data from a poll by the headteachers’ campaigning group, Worth Less?, shows 67% of heads have become more reliant on parental donations over the past three years.

Stubbings says the donations and pledges his school has received have enabled him to avoid making teachers redundant, retain staff during the current teaching recruitment crisis, create smaller class groups for less able pupils, and provide more A-level teaching than the school is funded for by the government. New science laboratories have been built and extra-curricular provision, including music and sport, has been enhanced.

Nearly 80% of pupils achieve A-levels at A*-B and the school is regularly ranked as one of the highest performing comprehensive schools in the country. Ten miles away, at another high-performing school, Hasmonean High School in Barnet, north London, parental donations have also been pouring in. In April Jewish News reported that a fundraising campaign at the school raised more than £1m in 36 hours, with some donors giving as much as £10,000 each. Headteacher Andrew McClusky says his school relies on the donations it gets from parents via voluntary contributions and fundraising campaigns, partly to negate funding cuts. “Falling government income and rising staff costs in recent years means the money raised is increasingly used to limit cuts, rather than enhance provision.”

The Observer found a number of examples of academies receiving corporate sponsorship. Fulwood Academy in Preston was given a £723,000 donation from the multimillionaire co-founder of Carphone Warehouse, which set up the Dunstone Education Trust that runs the school. It will be spent on IT infrastructure and equipment.

“The original system and equipment is now over 10 years old and is unable to deliver the performance we need for our staff and pupils,” says Fulwood Academy’s principal, Philip Grant. Without the donation, the school would struggle to teach pupils the skills they need to be employable and perform “at a high level”.

Large parental donations also enable state schools to compete with public schools. In Kent, Tonbridge grammar school recorded more than £2m in donations for the 2017-18 financial year. These included a £1.1m legacy and a donation of £673,000 from parents for school trips. The school says the donations enable it to provide pupils with “things the main [ie state] funding does not cover”, such as the school nurse.

It is no longer unusual to find schools in affluent areas benefiting from monthly parental donations. Data from an annual survey of PTAs last autumn shows 43% of parents in England have been asked to make a financial contribution to their child’s school, the highest figure ever recorded. On average, parents across the country donate £11.35 a month to a school, up from £8.90 in 2017, says PTA membership organisation Parentkind. Over a quarter (29%) of families gave £10 to £30 a month, 11% over £30 a month. One in five (21%) were asked to supply equipment, including books and stationery; 12% were asked to supply essentials, such as toilet paper.

At Trinity St Mary’s Church of England school in Wandsworth, south London, six out of 10 pupils are eligible for free school meals. Its PTA raises about £2,000 a year, mainly via its summer fair and ice pop sales, helping to subsidise school trips. But headteacher Lynn Anderson says she has recently drawn on PTA funds to help pupils made homeless. “The parent was moved out of the area, so we are subsidising the mother and her children’s travel to school partly out of PTA funds and partly out of my own pocket.” She thought of asking parents for a voluntary monthly donation, but decided against it. “Most wouldn’t be able to afford it.”

Anderson’s costs have risen as pay increases for teaching staff have come into effect, but her budget has gone down, she says. She has to be “very clever” to make the books balance. Next year experienced teachers will be replaced by cheaper, newly qualified ones. The school is renting out its hall nightly to bring in income. She works long hours and has taken on extra roles this year to cut costs, such as special educational needs coordinator and head of art. “I don’t allow the budget to impact on the children. The children always come first.”

2019-07-14
Previous Post: Want Better Restaurant Deals? Here’s What You Need to Do
Next Post: CCI calls meeting with restaurants’ association and EY for recommendations on e-commerce policy: report